Are Audio Books for Non-Readers? 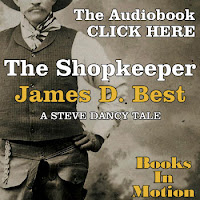 I normally read three to four books simultaneously. When I tell people this, they immediately asked if they are fiction or nonfiction. I tell them the mix varies. Actually, that’s only two thirds true. I'm usually reading an e-book, listening to an audio book, and reading one or more print books at the same time. The print books are almost always nonfiction. The Kindle and audio formats vary depending on what strikes my fancy, but generally both formats are fiction. It can be a bit confusing, but when I switch mediums, I back up a bit and usually get right back into the story.

My audio habit drew my attention to a Wall Street Journal article about audio books.  The claim is that audio is experiencing an explosion in popularity, especially with the younger generation. This article describes some interesting new concepts in audio that can leverage a franchise to a whole new audience. Throw in big-time tie-in marketing and you can extend a successful property into a phenomenon. Don Katz, Audible's founder and CEO is quoted in the article as saying, "We're moving toward a media-agnostic consumer who doesn't think of the difference between textual and visual and auditory experience. It's the story, and it is there for you in the way you want it."

One Audible.Com development is a syncing feature between audio and e-books. Now, that hit me where I live. I could read/listen to one novel at a time. Read my Kindle with my morning coffee, and then listen to the audio format driving to the gym and on the elliptical. Life just got simpler … which is what new technology is supposed to do, but seldom accomplishes on the first try. 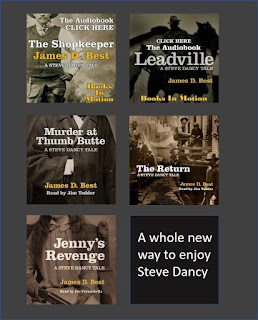 The Steve Dancy Tales are in large print, trade paperback, Kindle, and five are available in audio. For audio buffs, Books-in-Motion produced the first two books in audio format. Narrated by Rusty Nelson, a skillful actor, the books are available from Audible.com. Jim Tedder narrated Murder at Thumb Butte and The Return, and Joe Formichella read Jenny's Revenge.


Are audio books for non-readers? Sometimes. But audio books are also for readers who never want to be away from the story. Remember, “It's the story, and it is there for you in the way you want it."
at 1:04:00 PM