A First-Order Disaster Story About an Atmospheric River 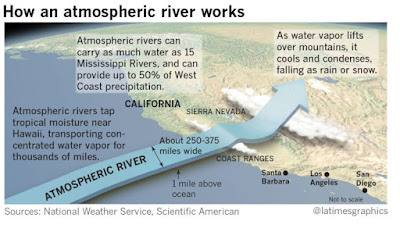 It’s to his credit that he focuses his attention on the human element of the deluge, rather than going all technical on the reader. We read as citizens, law enforcement, academia, politicians and outlaw gangs deal with the deluge. In the process, Best makes this a compelling—indeed frightening—story. Again and again I was impressed with Best’s characterizations and grasp of how profoundly a storm such as this can disrupt life. The potential power of water stayed with me for days. This is a highly recommended natural disaster thriller, written with acute attention to reality and little, if any, needless melodramatics.

Buy print or Kindle at Amazon


Available in paperback (6X9 Trade Paperback) and for Kindles.


“Stay put. You’re not leaving until I see my wife. Bring her to the door.”
“Hell, she’s fine. I was just trying to rattle you. You know how it is.”
“No, I don’t know how it is. That’s why I want to see her.”
“Which one’s your wife?” he asked tentatively.
“The older one,” I answered automatically, thinking only of Virginia and Jenny.
He laughed. “That old hag. I thought she might be your mother. Hell, she’s right as rain.”
I flipped my rifle up, grabbed the end of the barrel, and rammed the butt as hard as I could into the man’s face. I hit him square on the bridge of his nose, and I heard the cartilage crushed into his skull. I pulled back to hit him again, when I noticed the other men were going for their guns. Damn it. I dropped the rifle and went for my pistol, hitting the wall with my shoulder to get behind the collapsing man I had just hit. The first shot rang out from the next man on my side of the hall. I grabbed the lapels of the man I had bludgeoned and tried to pull him in front of me. I saw other muzzle flashes, one from my side of the hall and two from the men on Sharp’s side. I jerked my human shield away from the wall and extended my arm behind his head, firing at the second man on my side. I shot him three times before I shifted my attention to the other men. Both remained standing but writhed in pain. I shot them both again.
If the outdoor shooting had been noisy and hazy, the confines of the hallway made this fight ten times worse. If Virginia opened the door to see what was happening, I would never see her through the gun smoke. My ears rang, my eyes stung, and my throat felt raspy. The battle seemed like it had lasted for at least ten minutes, but I knew that was an illusion. The fight had lasted under five seconds.
I glanced behind me and felt relief to see Sharp still standing. I surveyed our assailants. None were dead yet, but three of them would die soon. I still held up the man I had clubbed. His bloody face appeared lifeless. Then I felt my shirtfront getting wet. Had I been shot? I let go of the body, and it fell to the floor. My entire front was soaked in blood. I ran my hand over my stomach and felt a wound. I probed a hole in my shirt with my finger and could feel a bullet just inside my skin. That didn’t make sense. Then I reexamined the man on the floor. He had been shot at least twice. I kicked him over with my foot. One exit wound. Damn. The bullet had spent its energy passing through his body, or at least most of its energy. I began to feel pain in my stomach.
Someone put his hand on my shoulder and turned me around. Out of fear or shock, I almost fired my Colt but recognized Sharp at the last moment. I wasn’t reacting right. What was happening? My stomach hurt like hell, and Sharp’s mouth was moving, but I couldn’t hear what he was saying. I felt wobbly. Is this what it was like to get shot? I didn’t know. I didn’t know because I always won my gunfights.
My legs felt weak, and I knew Sharp was holding me up. I was passing out.