Academic Nonsense about the American West 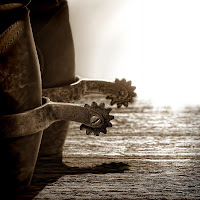 Looking for literary critiques of Western literature, I accidentally came across the article “Westerns” by Nicolas S. Witschi in Oxford Bibliographies. Witschi is Professor of English at Western Michigan University, where he teaches literature, cultural studies, and film. Sounds like some fun subjects. His website boosts, “My book Traces of Gold argues for reading the history of literary realism in the American West as a figurative engagement with the material, economic, and cultural value of natural resource industries.”

Wow! I was stopped by figurative engagement. In fact, I was stopped dead in my tracks as I stuggled to figure out what this showy sentence meant. Witschi was trying to convey a message, but instead of comprehending, I was Googling academic jargon. It reminded me of the line in Planes, Trains & Automobiles when the character Neal Page tells Del Griffith, "And by the way, you know, when you're telling these little stories? Here's a good idea - have a POINT. It makes it SO much more interesting for the listener!"

The article reads no better. Witschi seems to recommend studying Western literature as a sort of anthropological investigation of American culture. Although, it's hard to tell with sentences like, “As for questions about ‘literary’ quality and complexity, recent critical methodologies have not only expanded the criteria for assessing such things to include artifacts of mass market or popular appeal; they have also brought to light, with the purpose of working against it, the very means by which discursive power functions to identify and separate.” That’s as clear as the night sky over Montana.

The breadth of Western literature is astounding. From James Fenimore Cooper to Larry McMurtry, authors have been writing compelling historical novels about the American frontier. I’ll accept negative academic criticism of the Western genre as soon as I read a piece that dismisses The Once and Future King by T. H. White as mythology that promotes conquest, vigilantism, and sexism. Instead of searching for tidbits that can be extrapolated into a doctoral thesis, perhaps Witschi’s literature and film students would benefit from reading Westerns to learn the art and craft of storytelling.

After all, storytelling is the real oldest profession.

Is The Mythology of the Old West Dead?
The Future of the Western Genre
What happened to the Western?
The Western Heritage in Literature