9 Golden rules for the Road Runner and Coyote 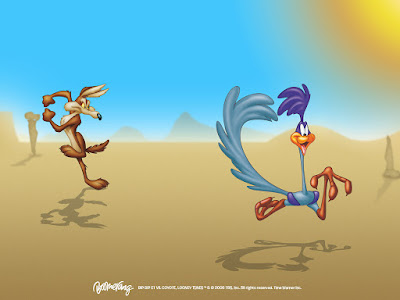 Chuck Jones created 9 Golden rules for the Road Runner cartoons. These famous rules insured that fans received exactly what they expected from these Loony Tunes characters. First the rules, and then some storytelling lessons we can draw from this popular series.

Rule 1. The Road Runner cannot harm the coyote except by going “beep, beep!”
Rule 2. No outside force can harm the coyote—only his own ineptitude or the failure of the Acme products
Rule 3. The coyote can stop anytime—if he were not a fanatic. (Repeat: “A fanatic is one who redoubles his efforts when he has forgotten his aim.” George Santayana)
Rule 4. No dialogue ever, except “Beep Beep!”
Rule 5. The Road Runner must stay on the road—otherwise logically he would not be called Road Runner.
Rule 6. All action must be confined to the natural environment of the two characters—the Southwest American desert.
Rule 7. All material, tools, weapons, or mechanical conveniences must be obtained from the Acme Corporation.
Rule 8. Whenever possible, make gravity the coyote’s greatest enemy.
Rule 9. The coyote is always more humiliated than harmed by his failures.

Previously, I published the 7 rules for the television series Bonanza. Television series, movie franchises, and even cartoons need a list of dos and don’ts so the characters and action remain consistency from episode to episode. Book series need the same. The protagonist must remain true to his or her character and the plot cannot go too far afield without losing fans. If you write a series, or even a single novel, write down the plot and character rules. This little exercise brings clarity and dependability to stories.

There are additional lessons to be gleaned from the Road Runner and Coyote. All stories revolve around an antagonist making life difficult for the protagonist. Different stories can have a multiple number of one or the other. Although Steve Dancy is the main protagonist in my Western novels, he has two (and now three) characters in secondary protagonist roles. Multiple bad guys or gals are also not uncommon.

After these main characters, the entire story is usually populated with all sorts of supporting and bit players. What if we were to whittle this down to the bare essentials? Could a story be told in a world populated by only one protagonist relentlessly pursued by a single antagonist? Steven Spielberg’s first movie Duel meets this criteria, as well as Tom Hanks’ Cast Away. These are intimate, tense stories. Of course, the Road Runner cartoons fits this minimalist construct. In fact, the Road Runner has no dialogue except for a single word repeated twice.

How in the world can you keep audience interest with these limitations? Watch. You’ll see storytelling reduced to its barest elements. Even if you have a cast of thousands, you can keep the reader’s interest by following the precepts displayed so eloquently by Road Runner cartoons. 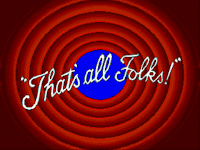