I carry my Kindle with me almost everywhere I go. Now, instead of fuming at airport security, I read or shop for my next book. If my wife asks to run into a store, I wait in the car and read. I even read in the interminable lines at Starbucks where no one seems to know how to order a cup of coffee with less than fourteen words. I cheered when the FAA finally ruled that my Kindle wouldn’t cause a fiery crash if I forgot to turn it off. Now I can read during that bouncy ride down the tarmac while the aluminum behemoth decides whether it wants to fly that day.

In other words, my Kindle became an appendage. Until I forgot it in San Diego. When I got to Lindbergh Field, I discovered I had left my trusty device in our condo. Darn. I couldn’t figure out what to do. Then I remembered the good ol’ days when I used to read words on paper. In short order, I bought the Jack Reacher novel Never Go Back by Lee Child. 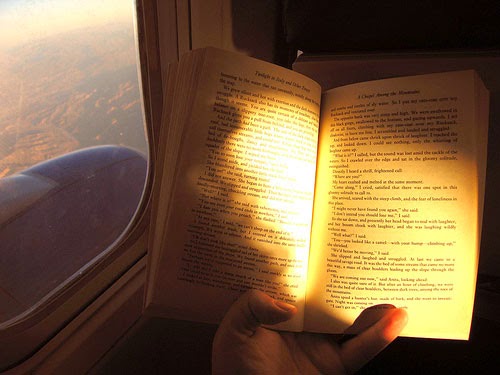 The first surprise was the paperback price of $9.99. No wonder I liked my Kindle. The second surprise was how much I enjoyed reading a real book. It instantly brought back memories of sand chairs beside Bass Lake or the Pacific Ocean, reading in bed, and getting lost in a story on an airplane. Really lost. Once, I didn't notice that we had aborted two attempts to land until the pilot interrupted my trance to tell us lowly passengers that if he couldn’t land this time he was diverting to another airport. What? Where had I been during all of this? Reading a paperback.

That got me thinking. I have never been that lost while reading a Kindle. There is something about the mechanical nature that interferes with total absorption. In a real book, I never think about flipping a page; I never stop to look up the definition of a word; I never adjust the little light bulb thingy; and I never glance down to see how far I am from the end. I wondered: are real books superior?
Then I thought about my son. I thought about how hard it is to tear his attention away from an electronic device. I thought about how automatically he jets around content, moves between reading different devices and even effortlessly switches between text and audio books. For me, reading a paperback was nostalgic, for him it would be foreign. Did I look back on good times with paperbacks the way my mother insisted that screenwriting was better when television broadcast in black and white.