The art of the short story has always eluded me

Western author JR Sanders posted to Facebook a link to “The Top 20 Literary Quotes About Short Stories,” at Writers Write, a South African website. (It was posted yesterday. Ain’t modern technology grand?) My favorite quote was from David Sedaris, “A good [short story] would take me out of myself and then stuff me back in, outsized, now, and uneasy with the fit.”

The article reminded me that I have never done well with the short form of storytelling.  A short story must convey a story, a mood, and a theme in few words. A difficult task. It may not be an exaggeration to claim that while novels are a craft, short stories are art. In bygone years, I did win honorable mention in a 100-word novel contest, but that was more about cleverness than storytelling.

I love to read short stories and own many collections, but I don’t have the time to write one. My last comment, of course is not a new thought. Pascal wrote, “I have made this longer than usual because I have not had time to make it shorter.” 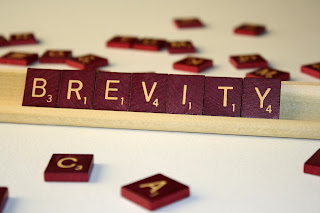 In 1690 the philosopher John Locke wrote about a famous work, “But to confess the Truth, I am now too lazy, or too busy to make it shorter.”

In 1750 Benjamin Franklin composed a letter describing his groundbreaking experiments involving electricity, writing, “I have already made this paper too long, for which I must crave pardon, not having now time to make it shorter.”

In 1857 Henry David Thoreau wrote in a letter to a friend that “Not that the story need be long, but it will take a long while to make it short.”

Woodrow Wilson was asked by a member of his cabinet about the amount of time he spent preparing speeches. He said, “It depends. If I am to speak ten minutes, I need a week for preparation; if fifteen minutes, three days; if half an hour, two days; if an hour, I am ready now.”

(Credit for the above quotations goes to Quote Investigator, a good site for writers.)

Abraham Lincoln spent untold hours crafting the Gettysburg Address, which at 271 words is one of the shortest and most famed political speeches of all time.

Brevity done with forethought is powerful. A comedian’s quip can destroy a longwinded speech. Just ask any target of Will Roger’s wit.

Ever since the demise of the family weekly magazine, short fiction has had few outlets. This is a shame. Western Writers of America occasionally publishes an anthology of short Western works, but there are few other places to even submit short stories.

Perhaps Amazon will once again redefine the market. The online bookseller has started Kindle Singles, which are short works in both fiction and nonfiction. The idea seems to be catching on because many national bestselling authors are publishing short works in this manner. Although I don't write short stories, I hope Kindle Singles revives the form. After all, throughout history, art has needed powerful sponsors.