The Lone Ranger—Hi-Yo Silver Away! 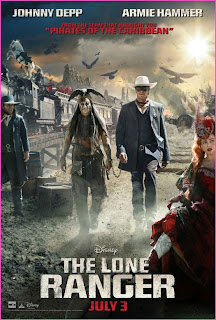 The Lone Ranger has ginned up a lot of controversy. It’s not a homage to the 1950s television series, nor should it be. Reinvigorating the Western genre means appealing to younger generations. Other than costumes, do the Batman films have anything to do with the television series? Well, in the Lone Ranger, they even ditched the costumes. Thank goodness, because a masked man in a form-fitting white outfit made as much sense on the range as Roy Roger’s blinged cowboy shirts. The movie appropriately retained only the symbolic white hat.

Purists criticize the film for enlarging the role of Tonto over the Lone Ranger. I disagree. The television series and the film are buddy stories and good buddy stories need parity between the partners. The film comes closer in this regard than the old Clayton Moore/Jay Silverheels series. To me, this had more of the flavor of the Lethal Weapon series—a bomance disguised with irreverent bantering.

Bottom line: I liked The Lone Ranger. I laughed out loud, which is rare for me inside of a movie theater. I was dazzled by some of the cinematography, and loved the score. The characters were different than I expected, but struck me as fresh. The plot follows the standard story line of a wronged protagonist reluctant to accept the mantle of hero. That’s behind us now, so from this point forward, it’s Hi-Yo Silver Away!

If you’re interested in some other perspectives, take a gander at these: