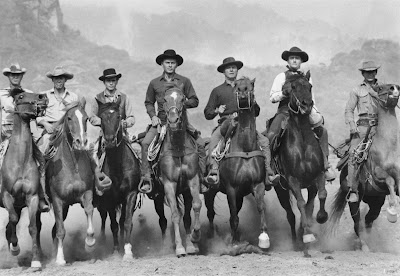 I was never a fan of signing cowboys. Roy Rogers, Gene Autry and lesser lights were too goody two-shoes for me. I categorize heroes as wholesome, flawed, and anti-heroes. In my mind, this is not three distinct categories, but a continuum, with Roy Rogers at one end and Anton Chigurh from No Country for Old Men on the other.

I’m not an enthusiast for either extreme. As a youngster, I preferred Wanted Dead or Alive and Paladin to the Lone Ranger. (I admit I watched Rin Tin Tin. You can’t get more wholesome than a boy and his dog.) Steve McQueen’s Josh Randall and Richard Boone’s Paladin engaged in gray professions and rejected many societal norms. Both characters were portrayed as generally good, but conflicted people who did the right thing in the end.

In the fifties, western films mostly pitted a good guy (and frequently a sidekick) against bad guys. In 1960, The Magnificent Seven broke this mold to start a trend toward far more complex protagonists.  There were not only seven “good guys,” they were flawed to the point of tipping into the anti-hero class. The Magnificent Seven was not the first western with anti-hero protagonists, but its enormous success triggered the Hollywood trait to copy what worked in the past. One of my favorites was the 1962 The Man Who Shot Liberty Valance. The complex, dark Tom Doniphon was one of John Wayne’s best roles, and James Stewart’s Ransom Stoddard certainly had reason for remorse. The Wild Bunch (1969), Silverado (1985), Young Guns (1988), and others employed crews of anti-heroes who seek redemption by righting wrongs. 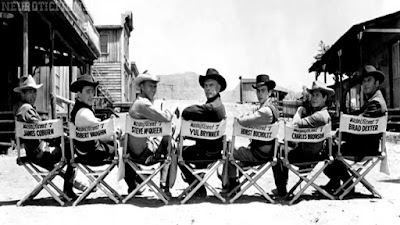 The Magnificent Seven, directed by John Sturges led the pack. In its original theatrical release, the box office exceeded more than double the cost of the film and it has been considered a genre classic ever since. Anchored by movie star Yul Brynner, the cast included television stars and solid character actors.  Many emerged from the film as bankable Hollywood properties. The taut script moved the story capably forward with character-driven dialogue and memorable scenes. A great director, a seminal cast, and an exceptional script. That’s all you need to make a Hollywood classic.

Antoine Fuqua directed the remake. Hit or miss? Remaking a box office success seems safe, but taking another turn at a classic carries its own set of risks. Most remakes fall short because the audience already has a preset image of the story and deviations can be jarring. Why would a studio invest 9 figures on a risky venture? Who cares about a new Magnificent Seven? Evidently a lot of people. The teaser below has over 7.5 million views. That number fills a lot of multiplexes.

Some have expressed concerns about this version's adherence to the politically correct. That’s not my concern. I’m disappointed in the overreliance on pyrotechnics. The current Hollywood disease is mind-numbing computer-generated imagery that overwhelms the story. Fuqua's take on this classic didn't avoid this pitfall.

By the way, my favorite piece of trivia from the original film has to do with a little tension on the set between Yul Brynner and Steve McQueen. McQueen kept upstaging Brynner, so Brynner supposedly told McQueen that if he did it one more time, he would remove his hat. It must have worked because Brynner is never seen without his black hat firmly snugged down on his bald head.

The Hateful Eight— Tarantino mailed it in 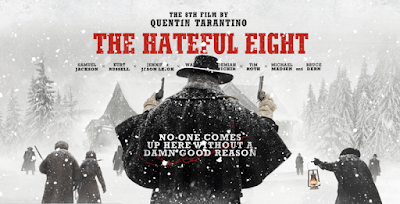 I like westerns and I like Quentin Tarantino films, so I had high expectation when I rented The Hateful Eight. Bummer. It's not only a crummy movie … punishment is compounded by its interminable length. Long is usually good for Tarantino, but it’s a bad sign if you ever consciously wonder when this thing will be over. The movie desperately needed editing by someone unintimidated by the grand master.

The Hateful Eight came across as a parody of a Tarantino movie instead of the genuine article. His good films are characterized by stylish cinematography, clever and incongruous banter, startling and extreme violence, and artful revelation of plot through time displacement. The Hateful Eight included all of these elements, but without charisma. It felt flat and uninspired. Tarantino dispassionately applied his formula without the artistic essentials that make it work.  Too bad. He’s tried twice to hit one out of the park with a western. Django Unchained was a ground-rule double, and he may have barely beat out an infield grounder with The Hateful Eight.

I have watched Pulp Fiction and the Kill Bill films many time. I’ve also re-watched other Tarantino movies. I can’t imagine spinning up The Hateful Eight again.