The Shopkeeper has been selected by Shelfbuzz as a featured book based on the cover design. 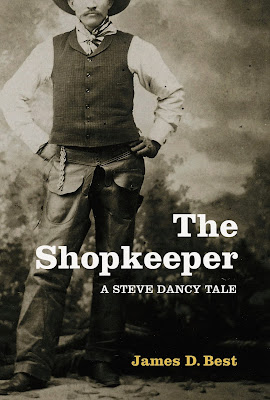 A Childhood Trauma Stays With You for Life

Recently I changed my Facebook profile picture to me as a youngster dressed up in my new chaps. The picture reminded me of a traumatic experience inflicted on me by my mother. This same summer, a man knocked on the door offering to take my picture on his pony. Directly behind him stood a real horse. A real horse. I couldn’t believe it. Despite my begging, my mother would have nothing to do with it. I have no recollection of how much he charged, but it couldn’t have been more than a couple dollars. I was crestfallen.

I ran to my room to pout, but then I saw my six-shooter in a holster with enough genuine silver studs to make Roy Rogers jealous. I had an idea. In a jiffy, I was dressed in chaps with my shiny guns hanging from my skinny waist. Running down the block I caught up with the man and his pony. My first sight was crushing. My best friend sat astride the horse looking as proud as Rin Tin Tin at the end of an episode.

I learned I was the lone outcast. All of my friends’ moms had popped for a picture. Despite hanging around for five more houses, the man never offered to let me sit on the pony. I was savvy enough to know he wouldn’t waste film on me because of my stingy mother, but I had hoped that if I looked the part he would at least let me sit on the horse for a bit. No such luck. I slunk home completely dejected.

I never forgot the disappointment and humiliation. One night over drinks, I told this horrifying tale to my best friend. At the end, he got up and left the room. I was puzzled about his indifference until he returned with an old photograph. It was a picture my him sitting on a pony with a gun in his hand. Darn. I had expected commiseration ... or possibly a taller tale of childhood trauma. Instead, he rubbed salt in the wound. After all these years, I was devastated once again.

The Return—Now Available in Audio! 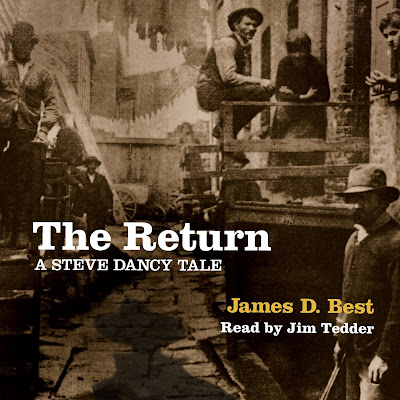 The Return, A Steve Dancy Tale is now available in audio. Jim Tedder has done an exceptional job in narrating this fourth book in the Steve Dancy series.

It's the summer of 1880, and Thomas Edison's incandescent bulb is poised to put the gaslight industry out of business. Knowing a good business opportunity, former New York shopkeeper Steve Dancy sets out to obtain a license for Edison's electric lamp. Edison agrees, under one condition: Dancy and his friends must stop the saboteurs who are disrupting his electrification of Wall Street.

After two years of misadventures out West, the assignment appears to be right up his alley. But new troubles await him in New York City. Dancy has brought a woman with him, and his high-society family disapproves. More worrisome, he has also unknowingly dragged along a feud that began out West. The feud could cost him Edison's backing ... and possibly his life.


In the near future, I will receive some promotional codes for free copies of The Return. If you would like a free audio copy of The Return, send me a note at jimbest@jamesdbest.com.

Wells Fargo 1880 Rules for Stagecoach Passengers ... And a Few of My Own

In the interest of travelers everywhere, here are a few rules of my own:
Now that I’m on the subject, I’ll tell you about my most memorable airplane incident. I was stuck in a middle seat, which always makes me cranky. The man in the aisle seat came aboard and stowed his briefcase in the overhead. Suddenly, the woman in the window seat shoved me and ordered me to let her out. Before I could move, the woman yelled at the man that he had laid his briefcase on top of her fur coat. He appeared startled at her assault but politely said she couldn’t take up the whole bin by laying her coat length ways.  She immediately shoved me again and demanded to get out. I struggled to get into the aisle, but now the man blocked my exit. Yelling went back and forth and all I could think about was that I had to spend five hours crushed between two warring parties.

Just before the flight attendant worked her way to our row, the man yelled, “Lady, I can tell you what you can do with that fur. You can—”

It looked like nothing could defuse the situation, and then a passenger about three rows back yelled, “Hey lady, the last time that fur was on an animal, it was laying in the dirt.”

The whole plane burst out in laughter. The chagrined woman retook her seat and never uttered another peep for the entire flight. I read in blissful silence.