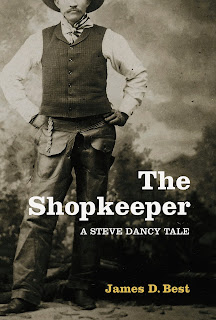 The protagonist in my Westerns is named Steve Dancy, and people ask if he's modeled after me. I tell them no, but I don't think they believe me. (Maybe I should start saying yes, because women seem to like him.) A fictional work has a single writer with a single personality. If you populate your work with slight variations of yourself, you'll create a homogenous universe that will bore people silly.


A writer must suppress his own personality when developing characters so they're all different from each other. It's not enough that they look and talk different—they must think and act differently. The fiction writer's personality will show up in the total work, but it's best if it's not directly reflected in the characters, especially the protagonist or antagonist. Have fun with these two. Make them unique from yourself and every other character in your work.


Here is a brief example from my new book, Tempest at Dawn.

James Madison gave him a friendly nod, then scurried across the lawn like an eager child who had spotted a new toy.
“What did the little titan want?”
Sherman turned to see Dickinson. “Now I remember why I avoid the State House Inn. Everyone bothers a simple man trying to write a letter to a friend.”
“Every part of that sentence is a lie. You’re not a simple man, delegates hurry in other directions when they spot you, and no one besides myself can abide you.”
“I am writing a letter.”
“Rebecca?”
“No, John Adams.” Sherman set the letter aside. “Pull up a chair. I’ll buy you lemonade or an ale.”
at 1:30:00 PM No comments: Links to this post