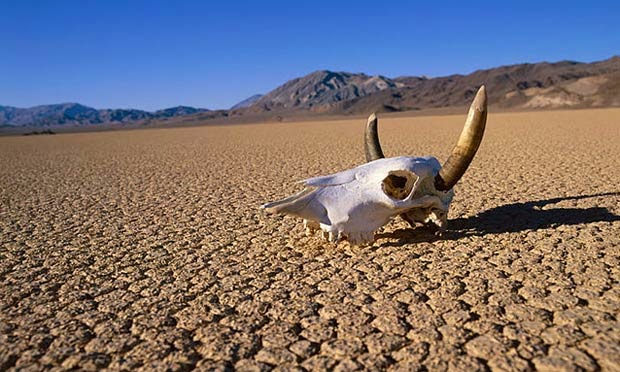 Death Valley is the hottest place on earth. The valley has amiable place names like Dead Man’s Pass, Funeral Mountain, Coffin Canyon, Hell’s Gate, Devil’s Hole, Suicide Pass, and my favorite—Dripping Blood Cliffs. This is rugged terrain. Or, as a local newspaper reported in 1907, "it has all the advantages of Hell without the inconveniences."

It’s even true that you can fry an egg on the sidewalk, but the rangers are tired of cleaning up the mess and suggest tourists instead fry their eggs on the hood of their car.

Good thing for us that it’s January. The daytime temperature only reached the mid-seventies and nighttime required a sweatshirt, a large fire, and a beverage suitable for sipping. We had a great time and I learned quite a bit about the region. 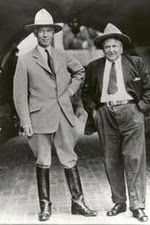 Everyone loves the story of Walter Scott, known far and wide as Death Valley Scotty. Scotty was a flimflam man who despite being discover as a fraud, successfully ingratiated himself to his rich mark, a man named Albert Mussey Johnson. Johnson was so enthralled with the con man that he supported Scotty for the remainder of his long life. Scotty told great stories and entertained the Johnsons and their innumerable guests. Most people conclude that if you’re glib enough the world is your oyster. I took away a different lesson. As a cast member of Buffalo Bill’s Wild West Show, Scotty knew the lure of Western mythos. Johnson, on the other hand, was a longtime wannabe cowboy. Scotty didn’t just tell stories, he delivered the Old West right into Johnson’s Death Valley parlor.

The whole episode reminded me of the western frontier's power of renewal. The chance to start a new life is the real reason tens of thousands abandoned their home for the Old West.  Here’s a quote from an Article I wrote a few years ago: Is the Mythology of the Old West Dead?

“The West, outer space, the future, or a make-believe land represents a new beginning in a fresh place away from home-the shrugging off of disappointments and a chance to start all over again. The romance and adventure of frontiers draws people desperate to escape the travails of their current existence. We've seen this in real life with the migrations to the New World and the Old West, but today many people satisfy this longing vicariously with fiction. If you're poor, your family makes you miserable, you've committed an act that offends society, or wanderlust has gripped you, then the adventure and limitless opportunity of a frontier beckons like a siren's call. Emigrating to a frontier means you get a do-over in a land with no rules, no fences, no referees.”

To me, this is the real lesson from Walter Scott and Albert Johnson. Johnson had been diagnosed to die young and had lived his life indoors accumulating wealth as a Chicago businessman. He loved the idea of a Wild West and Scotty delivered it for him. In addition, the dryness of Death Valley gave him a longer life and relief from his incessant pain. Of course, Johnson built his home—Scotty’s Castle—with all the citified luxuries of the early twentieth century. Scotty's Castle was both a mirage and oasis safely tucked away in a barren wilderness.

As John Wayne said, “The fascination that the Old West has will never die."

We celebrated the New Year with our kids and six grandchildren. It was a blast … and tiring.  Great start of a new year, but this morning, when I had an opportunity to catch my breath, I realized I had already burned a month of the new year. Wasn’t it just a little while ago that computers threatened Armageddon at the turn of the century? Time flies, especially when you’re having fun. If slowing down time requires staying bored, I guess I’ll opt for a mad dash to the finish line.

Speaking of staying busy, we head out Friday for a week of camping in Death Valley, although it seems a stretch to call it camping when we'll be living in a friend’s 40+ foot diesel pusher motorhome. Our transit and sojourn will be considerably more comfortable than the twenty-mule teams that used to haul borax across the valley to a rail spur. Those hardy teamsters thought a fringed whorehouse pillow positioned between their buttocks and the wood bench was the lap of luxury. I have to admit that I enjoy investigating frontier lifestyles with modern conveniences close at hand … especially flush toilets.

It’s been years since I visited Death Valley National Park and I’m looking forward to it. But planning the trip brought a thought to mind. Cattle drives, 20 mule teams, and the Pony Express are iconic imageries of the Wild West, but none actually lasted long. Although ranching and cowboys exist today, the great cattle drives had a relatively short lifespan of about twenty years. 20 Mule teams lasted only six years. The Pony Express operated for only eighteen months. All three of these frontier enterprises related to transportation, and all were obsoleted by the American penchant for speed. Our hell-bent for leather culture demands that we get stuff faster and faster. Nothing lasts unless it figures out how to deliver goods or services quicker tomorrow than it did yesterday.

For the most part, speed serves us well … except for passing through life. In that particular case, I think scrubbing off a bit of speed would be beneficial. Come to think of it, I’ll make one more New Year’s resolution: stop on occasion to smell the roses.