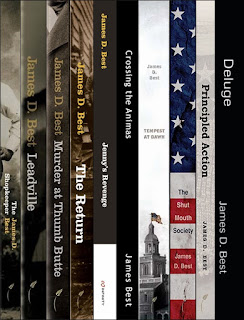 
In 1879, Steve Dancy sells his shop in New York City and ventures west to explore and write a journal about his adventures. His infatuation with another man’s wife soon embroils him in a deadly feud with Sean Washburn, a Nevada silver baron. Infuriated by the outrages of two hired thugs, the New York shopkeeper kills both men in an impulsive street fight. Dancy believes this barbarian act has closed the episode. He is wrong. He has interfered with Washburn’s ambitions and this is something the mining tycoon cannot allow to go unpunished.

Pinkertons, hired assassins, and aggrieved bystanders escalate the feud until it pulls in all the moneyed interests and power brokers in the State of Nevada.
Reviews:       Goodreads          Amazon          Audible         Professional


When New York City shopkeeper Steve Dancy moved west to experience the frontier, he wound up embroiled in a deadly feud … a feud he was forced to settle with guns. Now all he wants to do is follow up on a few business interests, write about his adventures, and continue his exploration of the West.

But in the autumn of 1879, Joseph McAllen asks Dancy for help. Ute renegades have abducted a young girl near Mesa Verde, Colorado, and the Pinkerton captain wants Dancy to join the rescue party.

Surprisingly, the trail doesn't lead into the San Juan Mountains, but to Leadville—a rich mining town teeming with the worst elements of a raw frontier. Before the small team can save the girl, shysters and killers conspire to enrich themselves from the incident.  Bitter feuds, vendettas, and greed turn the rescue into a bloody conflict that spans the state.

In the spring of 1880, Steve Dancy travels to Prescott, Arizona to gain control of a remarkable invention. But on his first night in the territorial capital, his friend, Jeff Sharp is arrested for a midnight murder at Thumb Butte. Dancy launches a personal investigation to find the real murderer, only to discover the whole town wanted the victim dead. For help, he turns to another old friend and associate, Captain Joseph McAllen of the Pinkerton National Detective Agency.


It’s the summer of 1880, and Thomas Edison’s incandescent bulb is poised to put the gaslight industry out of business. Knowing a good business opportunity, former New York shopkeeper Steve Dancy sets out to obtain a license for Edison’s electric lamp. Edison agrees, under one condition: Dancy and his friends must stop the saboteurs who are disrupting his electrification of Wall Street.

After two years of misadventures out West, the assignment appears to be right up his alley. But new troubles await him in New York City. Dancy has brought a woman with him, and his high-society family disapproves. More worrisome, he has also unknowingly dragged along a feud that began out West. The feud could cost him Edison’s backing … and possibly his life.


Jenny Bolton has plans, and they don’t bode well for Steve Dancy.

Married at fifteen to a Nevada politician, Jenny suffered repeated assaults, witnessed her husband's ghastly murder, buried her vile mother-in-law, and killed a man. Dancy, who had once served as her paladin, rejected her without as much as a goodbye. Abandoned on a raw frontier, she's single-handedly building an empire that spans the state. Despite her triumphs, she feels she never should have been left alone.

Soon to marry, Steve is eager to begin a new life unaware that Jenny is mad for revenge.


“Ben Law is tough… and mean. He enjoys taking care of problems for his boss. He won’t just verbally assault you. He and his men will hurt you. Bad.”

Steve Dancy is about to find this out. With his new home in Durango, Colorado, the kind with a nice white picket fence, and marriage on the horizon, the last thing Dancy wants is trouble. Especially with a mining tycoon and his henchmen. But this is the frontier … and sometimes a feud finds you. Sometimes, it even chases you. When the quarrel endangers Dancy’s fiancée and friends, he has no choice but to fight.

And this is a fight Dancy must win.

The real story of our nation's founding.

The United States is on the brink of total collapse. The military has been reduced to near extinction, economic turmoil saps hope, and anarchy threatens as world powers hover like vultures, eager to devour the remains. In a desperate move, a few powerful men call a secret meeting to plot the overthrow of the government.

Fifty-five men came to Philadelphia May of 1787with a congressional charter to revise the Articles of Confederation. Instead they founded the longest lasting republic in world history.
Tempest at Dawn tells their story.


The Shut Mouth Society
Can a 150 year old conspiracy alter the balance of power in North America?

When a rich Santa Barbara collector acquires a newly discovered Abraham Lincoln document, he asks detective Greg Evarts and UCLA professor Patricia Baldwin to authenticate it. Their research launches them into a dangerous struggle with a secret society formed during Reconstruction. Before they can solve the mystery surrounding the Lincoln manuscript, a shocking murder forces them to run for their lives.

As they race across the country, they discover a Civil War secret that could upset the balance of power in North America. Now Evarts and Baldwin must unravel the 150-year-old conspiracy before it’s too late … and before they are silenced for good.


In 1862, a sixty-five day downpour pummeled the western United States. California suffered the brunt of the storm. Almost a third of the state was under water, roads were impassible, telegraph lines down, rivers overflowed, hundreds of people died, and hundreds of thousands of animals drowned. Sacramento remained under water for six months, forcing the state government to move to San Francisco. Geological evidence shows that a flood of this magnitude hits California every one to two hundred years.

When will it happen again?

Principled Action
Lessons from the Origins of the American Republic


Prior to 1776, world history was primarily written about kings and emperors. The American experiment shook the world. Not only did the colonies break away from the biggest and most powerful empire in history, they took the musings of the brightest thinkers of the Enlightenment and implemented them. The Founding of the United States was simultaneously an armed rebellion against tyranny and a revolution of ideas—ideas that changed the course of world history. Principled Action shows how the Founders built this great nation with sacrifice, courage, and steadfast principles.

The Digital Organization is a non-fiction technology book. Since it is well over a decade old and technology moves at the speed of light, you don't really want to buy this book.

Participated as one of the researchers and draft writers for Beck's Being George Washington and Miracles and Massacres.