An Editor on the Comstock Lode by Wells Drury 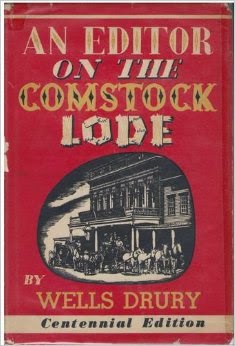 Previously, I wrote that Mark Twain is my favorite Western writer. Twain actually experienced the West at its rowdiest and Roughing It describes his experiences with humor and a touch of the storyteller’s art. Owen Wister is another author who experienced the real Wild West, which gave The Virginian its authentic feel. Wells Drury’s An Editor on the Comstock Lode is yet another great source for Western lore. In fact, its organization and humorous writing makes it an indispensable reference source for Western writers. Drury’s time as a newspaper editor in Virginia City gave him a front row seat to the goings on in that raucous town. His book covers:
My favorite, of course, is the chapter he dedicates to Candelaria and its suburb of Pickhandle Gulch. This mining camp figures prominently in my Steve Dancy Tales, but I chose to call the main town Pickhandle Gulch because I liked the name. Fiction writers get to bend history to suit their story. It’s one of the fun parts about being a novelist. I suspect Twain, Wister, and Drury did a bit of bending themselves.