One of the First Mass-Market Bestsellers

The Virginian: A Horseman of the Plains by Owen Wister was one of the first mass-market bestsellers. The 1902 novel received immediate critical acclaim and was hugely popular, eventually spawning five films, a successful play, and a television series. An instant success, it sold over 20 thousand copies in the first month, an astonishing number for the time. It went on to sell over 200,000 thousand copies in the first year, and over a million and a half prior to Wister's death. This Western classic has never been out of print. (You can read my review, "The Virginian, A Classic Western Revisited" at Ezine Articles.) 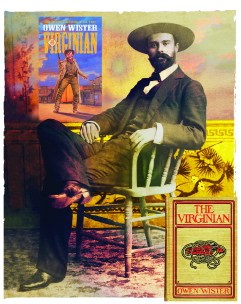 The Virginian inspired hundreds of stories about the Old West—including the Steve Dancy Tales. After reading The Virginian, I thought it would make an interesting story if the Easterner was the protagonist rather than the narrator. I always enjoyed fish-out-of-water stories.

The Virginian is credited with inventing the literary Western, and many people are familiar with the book. Less is generally known about Owen Wister. In 2002, Harvard Magazine published a short biography of Wister: oddly titled "Owen Wister, Brief life of a Western mythmaker:1860-1938." (By my math he lived to be 78 years old.) Thousands of Westerns have been written, but The Virginian set the benchmark for excellence in the genre.
at 7:57:00 AM