I think I did pretty well, considering I started out with nothing but a bunch of blank paper.--Steve Martin 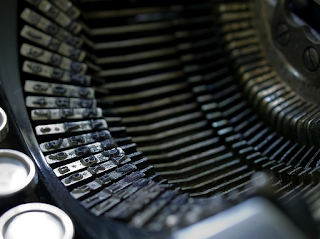 Some editors are failed writers, but so are most writers.--T. S. Eliot

When a book, any sort of book, reaches a certain intensity of artistic performance it becomes literature. That intensity may be a matter of style, situation, character, emotional tone, or idea, or half a dozen other things. It may also be a perfection of control over the movement of a story similar to the control a great pitcher has over a ball.--Raymond Chandler

No iron can pierce the heart with such force as a period put just at the right place.--Isaac Babel

A tired exclamation mark is a question mark.--Stanislaw Jerzy Lec

Any word you have to hunt for in a thesaurus is the wrong word. There are no exceptions to this rule.--Stephen King

I'm all in favor of keeping dangerous weapons out of the hands of fools. Let's start with typewriters.--Solomon Short

In a thousand words I can have the Lord's Prayer, the 23rd Psalm, the Hippocratic Oath, a sonnet by Shakespeare, the Preamble to the Constitution, Lincoln's Gettysburg Address and almost all of the Boy Scout Oath. Now exactly what picture were you planning to trade for all that?--Roy H. Williams

Success comes to a writer, as a rule, so gradually that it is always something of a shock to him to look back and realize the heights to which he has climbed.--P. G. Wodehouse

A writer should have another lifetime to see if he's appreciated.--Jorge Luis Borges