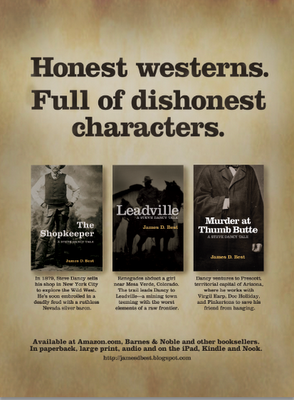 The Steve Dancy Tales are being promoted in True West magazine with a full page advertisement. The collector issue celebrates the Arizona Centennial, and also recognizes Prescott, Arizona the Top Western Town for 2012. This is a great connection with a great magazine because the latest Steve Dancy adventure, Murder at Thumb Butte, occurs in 1880 in Prescott. Pick up a copy. It's filled with little known facts about Arizona's road to statehood, the gunfight at the OK corral, the 12 guns that tamed Arizona, and the Top Ten True Western Towns of the year.