Excerpt from Deluge, A Disaster Novel 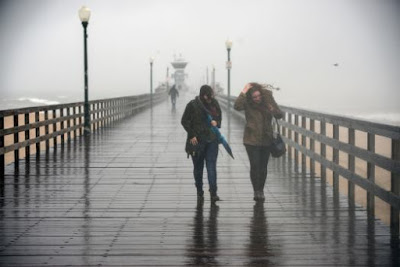 Greg Evarts and Patricia Baldwin are back and this time they only need to save the state of California. Here's an excerpt from the first chapter of Deluge.

Baldwin said into the phone, “Mr. Gleason, I understand. I’ll be in Sacramento first thing Tuesday morning.” After a pause, she added, “Of course, sir. Thank you.”

She tapped to end the call, turned off her phone, confirmed that it had gone dark, and then exclaimed, “Shit!”

She lifted her eyeglasses slightly and let them fall back on her nose. “Yes, damn it. They’re in a panic over this damn rain. Rain, for Pete’s sake.”

“I take it they want you up there Tuesday?”

“I wish,” Baldwin answered. “The commission meets at 8:00 AM on Tuesday, meaning I leave noonish Monday, and they want me to bring a week’s worth of clothes. Damn it, I have classes, committee meetings, office hours, and a speech in Los Angeles on Thursday night.” She threw her phone onto the couch. “I wish I had never accepted the governor’s appointment.”

The governor of California had appointed Baldwin to the Seismic Safety Commission, and she had been on the advisory council for less than a year.

“I thought that commission dealt with earthquakes, tsunamis, and volcanoes.”

“Some idiot evidently believes a few days of rain can trigger one of those. I don’t need some volunteer work to destroy my career. This is stupid.”

“It may hamper your career, but it won’t ruin it. It’s Saturday. This storm will probably pass before you sit down for your meeting. You’ll be back in time to make your speech.”

Suddenly, she asked, “What are you eating?”

He held up the chop by the bone. “Last night’s leftovers. I need protein.” He ripped off a piece of meat with bared teeth like he was ravished, and she laughed at his antics.

“Don’t we make the couple,” she said. “You walk around chewing on a bone like a caveman, and I’ve been talking to the lieutenant governor in pajamas. I’m surprised they don’t deport us back to Oxnard with the riffraff.”

“We had fun there. Maybe I can buy back my old house.”

“No, I’m good. Just frustrated that this stupid commission can jump up and disrupt my life.”

“You’ll be back soon. You know bureaucrats, always making a big thing out of nothing.”

She walked over to a sofa table and picked up her coffee. She took a sip while staring out to sea.

“Perhaps not this time. I heard fear in Paul’s voice. They got seven inches of rain in the last week.”

“Seven inches? Our drizzles haven’t added up to squat.” He thought about the implications. “Did he say if any dams were in jeopardy?”

“Yes.” She didn’t turn away from the murky, cloud-enshrouded ocean. “All of them.”