Mobridge, South Dakota takes it name from the first railroad bridge to cross the Missouri. The town draws tourists in October like Times Square draws merrymakers on New Year’s Eve. Okay, maybe that’s a slight exaggeration, but there were a lot of people in Mobridge this past week dressed in see-me-now-orange. I was one of those revelers. I drove up from Nebraska to visit friends, hunt pheasants, and eat fry bread tacos.

Hunting pheasants in South Dakota is a team sport. A couple of blockers sit at one end of a field as an orange-clad army chases the birds toward them. When one or more of the birds take flight, everybody becomes sex obsessed. A license allows you to hunt roosters, so the first order of business is to determine the sex of a bird flying as fast as its wings will carry it. This is why everybody upon seeing a bird shouts out the gender. The more nebulous cry of “Bird up,” puts the onus on the shooter. If this isn’t difficult enough, sometimes a rooster takes flight with his entire harem. You could call him cowardly for hiding behind hens, but it’s not exactly a bird-brained tactic.

The scent of fry bread tacos makes your mouth water as soon as you enter Mobridge. These gigacalorie indulgences possess every unhealthy food group known to man. Woof them down with a sugary soda and you taste heaven … except I’m told that in heaven, fry bread tacos are not sinful.

Our hunting party took up six cabins along the bank of the Missouri. All good friends and relatives. Each cabin included a tiny cooking space generously called a kitchen in the glossy brochure. The stove top tilted, the refrigerator squealed all night long, and microwave had enough power to boil a cup of water in under ten minutes. We crammed twenty people into an already overheated cabin to eat homemade meals on mismatched dishes. I’ve never had so much fun. 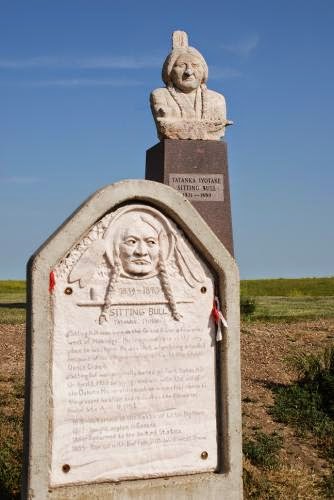 I also found time to visit Sitting Bull’s gravesite … or perhaps not. In 1953, a bunch of drunks crept up to Fort Yates, North Dakota, and mistakenly liberated the wrong bones, or they brought the right remains to Mobridge to rest near Sitting Bull’s birthplace. I guess it doesn’t matter. Today, a stately bust honoring Sitting Bull gazes out over the Missouri River. Since I’ve written about Sitting Bull’s tragic death, I found the memorial interesting. So did others. We ran into a father and son from Munich visiting the supposed grave site. You could say the stealthy grave robbers achieved their purpose by creating a tourist attraction, except over the course of a week, we never saw anyone else at the memorial.