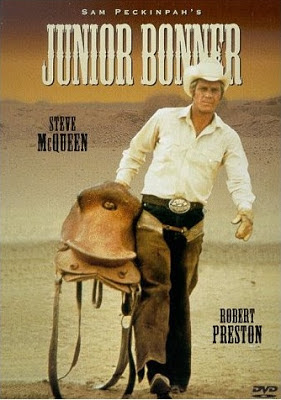 I recently watched Junior Bonner again and it is an exceptional film. Great script, superb acting, and as they say in the commentary, "not just good editing, perfect editing." Like many contemporary Westerns, the script laments a lost era, but more important to the genre, Bonner reflects the ethos of the pioneering West.

Peckinpah was a great director. My favorite Peckinpah films were Junior Bonner and The Ballad of Cable Hogue. Both are great character studies. The films showed that Peckinpah didn't need slow motion violence to tell a good story.

It occurred to me that Junior Bonner shares similarities with Downhill Racer, which starred Robert Redford. The films show how a good story can sometimes present a more realistic picture than a documentary. Both movies revealed the nature of lone athletes compelled to compete against themselves. There are many great team-sport movies, but these films captured the primal culture of individual sports. Redford and McQueen also have never acted with more subtlety.  Even if you don't care about rodeo or skiing, these movies bring you into a fascinating world very unlike the way most of us live.

One last note: The Junior Bonner DVD also has an excellent commentary that ought to be listened to by every film student or film enthusiast.