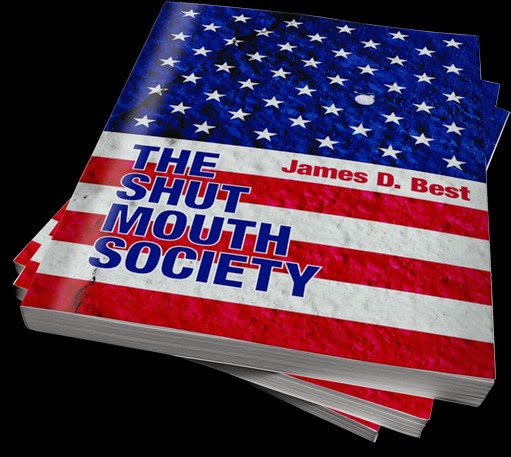 "One of the bad guys -- and there are plenty -- in James D. Best's The Shut Mouth Society sneeringly calls Greg Evarts a "city policeman," making it clear that he thinks the Santa Barbara, CA police detective is an easily handled lightweight.

What a mistake! Evarts is a veteran of a top secret army unit, an expert in decoding ciphers and a good friend of multimillionaire Abraham Douglass, a descendant of black anti-slavery pioneer Frederick Douglass. Abraham Douglass is a collector of Lincoln and Civil War documents and wants Evarts and UCLA Lincoln expert Professor Patricia Baldwin to authenticate an Abraham Lincoln document in his possession.

At stake is nothing less than the balance of power in present-day North America. After the murder, Greg and Patricia travel the country, driving to New York City, Boston, Des Moines, Iowa and Omaha, Nebraska where more violence reveals the impact of The Shut Mouth Society on present-day events. The plot reminds me of Dan Brown's "The Da Vinci Code," which has a similar pairing of an academic -- a male in Brown's novel -- and a female French police officer. The secret society in Brown's novel is matched by one that's even more brutal in "The Shut Mouth Society."

The Shut Mouth Society is a fast-moving, well-written novel that is of particular interest in this bicentennial year of Abe Lincoln's birth."