Steve Dancy Wants to be Pals with Jack Reacher 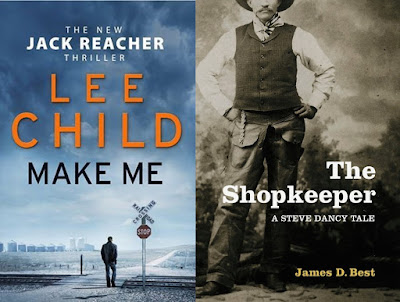 There have been some memorable fictional characters. Sherlock Holmes, James Bond, Hercule Poirot, and Harry Potter to name a few. (I’d like Steve Dancy to climb into this group, but I need a few million more sales. A little help, please.) The above names are make-believe people, but known the world over. How does a branded character come about? They must be difficult to create because there are so few of them. Strong characters are not rare. Think of Elizabeth Bennet, Tom Sawyer, Captain Ahab, Rhett Butler, or Hannibal Lecter. But for the most part, these were one-offs, while a branded character returns time and again, frequently leaping from the printed page to screen and stage.

The inventors of Holmes, Bond, Poirot, and Potter didn’t want for material things. Sherlock Holmes has been portrayed on screen more than any other character, and that excludes the House television series. Spanning 54 years, James Bond is the longest running film series with a human protagonist. (Godzilla is the longest and most prolific film series.) Agatha Christie used Poirot to propel herself to the #1 Bestselling author of all time, while Harry Potter is the #1 bestselling book series.

These are worldwide icons. Yet they’re fictional. They sprang from the imagination of authors. How in the world do you do that? One author has told us.

I recently reread Killing Floor by Lee Child. In a new introduction, Child describes how he developed the Jack Reacher character, who was introduced in this novel back in 1997.

“I liked some things, and disliked other things. I had always been drawn to outlaws. I liked cleverness and ingenuity. I liked the promise of intriguing revelations. I disliked a hero who was generally smart but did something stupid three-quarters of the way through the book, merely to set up the last part of the action.  Detectives on the trail who walked into rooms and got hit over the head from behind didn’t do it for me. And I liked winners. I was vaguely uneasy with the normal story arc that has a guy lose, lose before he wins in the end. I liked to see something done spectacularly well. In sports, I liked crushing victories rather than ninth-inning nail-biters.

To me, entertainment was a transaction. You do it, they watch it, then it exists … for me the audience mattered from the start.

Child sat down and came up with three specific conclusions.

"First: Character is king. There are probably fewer than six books every century remembered specifically for their plots. People remember characters … so my main character had to carry the whole weight.

Second conclusion: If you can see a bandwagon, it’s too late to get on … it’s a crowded field. Why do what everyone else is doing? … The series that were well under way … lead characters were primus inter pares in a repertory cast, locations were fixed and significant employment was fixed and significant. I was going to have to avoid all that stuff.

But the third conclusion, and the most confounding conclusion: You can’t design a character too specifically … a laundry list of imagined qualities and virtues would result in a flat, boring, cardboard character … I decided to relax and see what would come along. Jack Reacher came along.”

Child goes on to explain that Reacher has the following characteristics:


Child wrote: “I wanted the kind of vicarious satisfaction that comes from seeing bad guys getting their heads handed to them by a wrong-righter even bigger and harder than them … so Reacher always wins.”

I started by asking, “How does a branded character come about?” It appears by creating a character unlike all the other series protagonists. Not a unique trait, but opposite in every detail. At least it worked for Reacher. A Forbes study discovered that Jack Reacher is the strongest branded character in fiction, and Lee Child has the strongest reader loyalty of any bestselling author.