Previously I wrote a blog posting which questioned whether Western mash-ups worked. I personally dislike mash-ups because they rely too much on a clever big concept rather than on good storytelling. I suspect Hollywood likes mash-ups because they don't think a Western story can stand on its own, especially with the younger crowd. So I openly displayed my prejudice against projects that draped a popular genre disguise over a Western in order to make it more marketable. Besides, I hated Cowboys and Aliens. I prefer unalloyed Westerns. 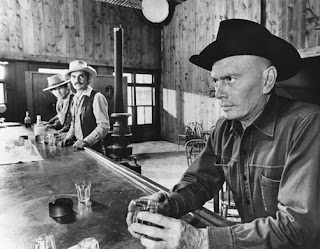 Except I forgot one of my favorite Westerns. Part of the attraction of Westerns is vicarious adventure, and no film caught this concept better than the Yul Brynner classic Westworld, which happened to be a science fiction/Western mash-up before someone coined the term. What would happen if an imaginary adventure became life-threatening? How would a naïve observer react if make-believe suddenly became real? Now that’s a theme for a great story.

All of this was brought to mind when I read that HBO has committed to a Westworld series pilot by Bad Robot and Warner Bros. Here is the story in Variety. So I was wrong. All mash-ups are not bad … only the ones I don’t like.

Related Posts
Has a Western mash-up ever worked?