Getting More People into the Library 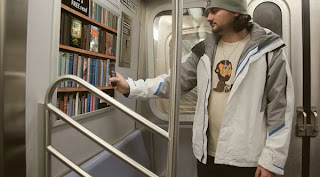 Students at the Miami Ad School have come up with an innovative way to draw more people into libraries. Using smartphone standards that allow the transfer of data by bringing devices close to each other, the project proposes that subway riders could download book samples underground during a commute. An app would then tell them where they could check out the book at a library branch. Good idea.

Yesterday, I asked if libraries would become museums. Not if they adopt innovative ways to encourage reading and membership.

Vimeow video on the concept.

Here’s an idea I had. Why not conduct a contest between two teams of NYU students. They will be given an assignment to research one specific subject. The first team would be restricted to the Internet, while the second team could only use the resources—including real, live, breathing librarians— of the New York Public Library. Someone rich (that would not be me) would put up a prize of a few thousand dollars. The research results would be judged by NYU professors and college librarians for thoroughness and accuracy. I believe the NYPL team would win today. But if we made this an annual contest, I'm not as sure about future results.

John Allen Paulos once said, "The Internet is the world's largest library.  It's just that all the books are on the floor." Let's see if some bright college students can sort them out.