God Created Men and Sam Colt Made Them Equal 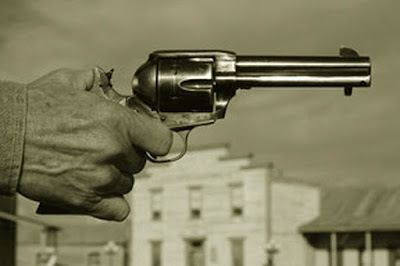 In Hartford, Connecticut, Samuel Colt built the world’s largest private armament factory. The factory was not only the largest, it was probably the world’s most advanced manufacturing facility. As a precursor to Henry Ford, Colt used interchangeable parts, production lines, and standard work. In 1856, the company could produce 150 weapons per day.

Samuel Colt was an engineer and mechanic who continually refined his designs. For his famous revolvers, he obtained dozens of patents. In 1873, after his death, the Colt’s Manufacturing Company introduced the iconic Colt Single Action Army revolver, also known as the Peacemaker, which has since been in continuous production except for a short hiatus in the 1940’s and 50s.

The Colt’s Manufacturing Company has produced more than 30 million pistols, revolvers and rifles. Samuel Colt, one of the richest men in America, once wrote, “Money is a trash I have always looked down upon.” There are several ways to get rich, but fun way is to do something you love, and doing it so well that customers flock to your door. These people built empires that last generations, and they didn’t do it for the money. Money was a byproduct of their passion. If you don’t believe me, ask Samuel Colt, Walt Disney, Steven Spielberg, Coco Chanel, or Bill France (NASCAR). Steve Jobs and Bill Gates fall into this category, but I'm not sure about the current generation of Silicon Valley entrepreneurs. They seem to be in it for the money.