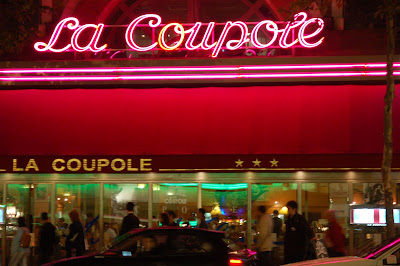 Yesterday my wife and I left Paris for Omaha. That’s not a sentence most people would enjoy writing, but we’ve been gone a month and look forward to our home and dullish routines. Twenty-five years ago I was in Paris nearly every month and my wife often accompanied me. She did the museums, cathedrals and other large buildings. I worked. I enjoyed interacting with the French in a non-tourist setting and kidded my wife that she did dead France while I did live France.
This trip we focused on dead France … and walking. Museums and walking. Cathedrals and walking. Monuments and walking. Walking to find new and interesting places to eat. Sometimes just walking to watch the street life. But if you placed all of our steps end to end, you still wouldn’t reach a Brasserie-free zone. How cool is that!
We noticed a couple of differences from twenty-five years ago. For one thing, tourism isn’t nearly as easy or enjoyable. Terrorists and technologists put a dampener on the fun. 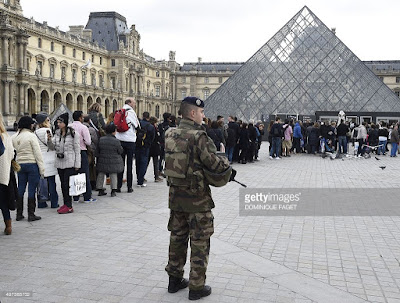 Security is everywhere. And I mean tough, no nonsense soldiers, not our clock-watching TSA gatekeepers. These decked out fully armed men and women strode purposefully in urban warfare formation. They never stopped. They never quit looking around. They never acted friendly.
Every public place included security checkpoints. In most cases, this meant two lines; one to check your bags and another for tickets. Standing line could wear you out before you got the first glance at a historic artifact. Worse, everything was cordoned off. No more grand vistas of the Eiffel Tower. The base is surrounded by barricades and open space under the tower is the province of black and white photographs from the pre-digital age. Notre Dame is still free, but a glacial line to get through security can consume the entire forecourt. If you’re a millennial, you think this is normal. How terribly sad. 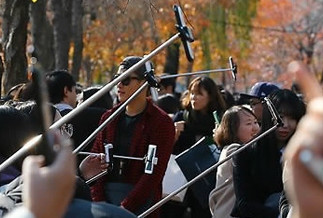 Technologist have spoiled the party as well. Everybody born after the breakup of the Beatles has a selfie stick and insists on recording every moment of their lives. It’s as if they can’t enjoy life in the moment. They must see a digital representation to believe it’s real. And they can’t just snap their picture and get on with it. They wield their selfie stick like a baton, twirl it, shove it in other people’s faces, or just endlessly hold up traffic as they preen and mug for the perfect shot to share with the world on Instagram. Everybody is a celebrity in their own mind.
In the olden days, read the distant Twentieth Century, single-purpose cameras took photographs on expensive film that took more coin to develop and print. It also cost far too much to make a copy for everyone on the planet. Tourists stood away from the object of interest, took their picture, and moved on. That meant Kodak Moments seldom disrupted your enjoyment of a world wonder. Not today. People crowd forward so they can shoot backwards while claiming an arc of free space by waving a plastic stick with all of the authority of a scepter. Digital is free, everyone has a device, and spreading copies to people you don’t know is de rigueur. Pity the poor soul who just wants to feast on an exhibit with their eyes and ears.
These inconveniences were restricted to tourist attractions. Our small hotel in a pleasant neighborhood had all the charm of the Paris we knew twenty-five years ago. We were nestled on a quiet side street, with tiny grocery stores, casual cafés, fine dining, with trendy shopping, Metro stations, and bustling Parisians just steps away.
We had a wonderful time. Actually, our first visit was thirty-five years ago. At the time, we had never been anyplace more exotic than Tijuana. On our first night, we walked out of our Left Bank hotel and wandered down the street to a restaurant. We had no idea how to order. We knew no French. The waiters knew no English. We were so naïve, we ordered entrées as our main course. We had accidentally chosen La Coupole, the most famous and historic restaurant on all of the Left Bank. The whole experience was fun as hell, and it had a lot to do with our penchant for travel ever since. We were again in Paris for our fiftieth anniversary, so we decided to celebrate our grand night at La Coupole. It was fun. The food was great. The waiters charming. And best of all, the ghosts of all those famous artists and writers joined us in celebration of our first fifty years together.
Viva la France.
P.S: I write this from New York City, not Omaha. Our flight was cancelled. My last post (Planes, Trains, and Automobiles) bewailed our travel mishaps getting to New York. Evidently our travel hobgoblin has returned.
at 6:30:00 AM