Empires of Light: the story of a fascinating feud in the Wild East 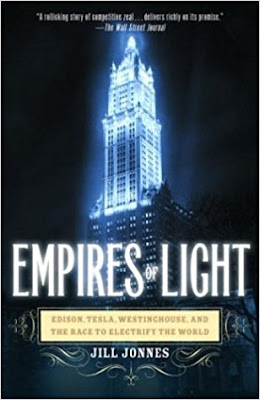 During the time of America's Wild West, there was also a wildness in the civilized East. It wasn't a range war; it was ruthless combat on the frontier of science. Telegraphs and trains compressed time and space, engines and motor gave man super strength, and electricity expanded day into night. These were parlor tricks that burst out of the laboratories to the wonder of a bustling nation. It was near magic, and hard-nosed men fought to control these supernatural enterprises.

Jill Jonnes in Empires of Light: Edison, Tesla, Westinghouse, and the Race to Electrify the World does an excellent job of helping us understand the energy and competitiveness of the time. The "War of the Electric Currents" was an exciting part of our history that could have been made dull as mud. Jonnes avoids tedious explanations of technology to tell the story through three men: Thomas Edison, Nikola Tesla, and George Westinghouse. The supporting cast includes robber barons that provided money and intrigue. It was a Wild East fighting over a vast business frontier without rules, fences, or referees.

In researching my latest book, I read, or seriously scanned several books on Edison and one on Tesla. I picked up the Jonnes' book because I wanted a better understanding of Westinghouse. Jonnes does a good job of presenting all three key players in the "War of the Electric Currents." Empires of Light is especially good if you want a single book that puts this fascinating feud into perspective. She makes these giants human and shows that they had distinct personalities. Empires of Light is a nicely done, balanced history book about a world-shattering period of invention and innovation.
at 9:29:00 AM