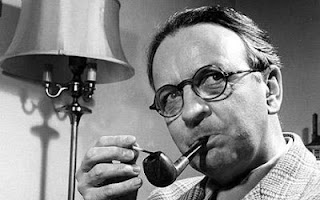 In 1944, Raymond Chandler wrote an essay for The Atlantic Monthly titled, "The Simple Art of Murder." It was reprinted in 1950 in book form by Houghton Mifflin along with eight of Chandler's early stories.

Chandler was highly opinionated about art, fiction, and detective stories. There are some nifty tips in here for aspiring and accomplished mystery writers.

Here are a few snippets.

Fiction in any form has always intended to be realistic ... Jane Austen’s chronicles of highly inhibited people against a background of rural gentility seem real enough psychologically. There is plenty of that kind of social and emotional hypocrisy around today.

The murder novel has also a depressing way of minding its own business, solving its own problems and answering its own questions.

Yet the detective story, even in its most conventional form, is difficult to write well. Good specimens of the art are much rarer than good serious novels. Rather second-rate items outlast most of the high velocity fiction, and a great many that should never have been born simply refuse to die at all. They are as durable as the statues in public parks and just about that dull.

"really important books" get dusty on the reprint counter, while Death Wears Yellow Garters is put out in editions of fifty or one hundred thousand copies.

At the end of "The Simple Art of Murder," Chandler gives a great definition of a hero that I abridged in an earlier post titled: What makes an appealing hero?

Link to the full article