The complex lives of common people 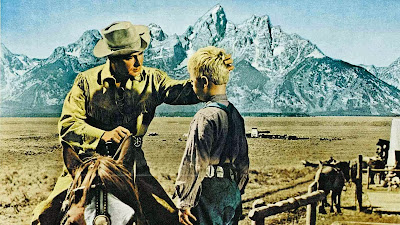 Shane is one of my favorite Western films. The Jack Schaefer book is also one of my favorite Western novels. There are great films and there are great books, but Shane is a rare instance where both the book and film are distinguished in their own right. The movie is an honest rendition of Schaefer’s story, while artfully making adjustments for a visual presentation of a novel.

In honor of its 60th anniversary, Andre Soares wrote a Alt Film Guide piece about the movie. I didn’t like the article. Among other things, Soares seems apologetic that he admires the film. After all, this is an art film site, and how could a Western be art? The following paragraph reveals his prejudice.

“Now, what makes Shane special is that while Stevens and Gurthrie Jr.’s movie feels like a paean to the Old West and to Western movies in general, it actually demythologizes both American history and the film genre that turned into stars the likes of Tom Mix, John Wayne, Gene Autry, Roy Rogers, and, later on, Clint Eastwood. Read between the lines and you’ll see how subversive Shane is — how unheroic its heroes are, how complex the lives and minds of its "common people," how civilization can be just another manifestation of barbarism; and, no matter their righteousness, how hollow human victories can be.”

What claptrap. This is basically a glass-half-empty view of humankind. The film I saw was far more uplifting and hopeful. Shane is a story of redemption, not the barbarism of civilization. To justify his admiration for Shane, Soares basically claims there is a depth to the story that is uncharacteristic of the genre. He needs to read and watch more Westerns. Sure, there are lots of junky Westerns, but despite Raymond Chandler writing great fiction, a lot of crime drama is also unmemorable. The depth and nuance of Schaefer’s story is not uncommon, nor are instances of quality in Westerns any more rare than for other popular genres.

Shane is a great story, presented admirably in the print and film versions. Just ask Clint Eastwood and Robert Day, the directors of Pale Rider and The Quick and the Dead, both basically remakes of Shane.