The perils of being a midlist novelist 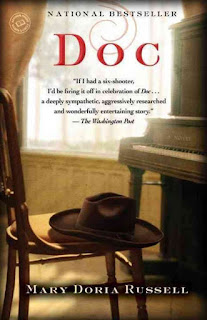 The Washington Post has done an article on the perils (and rewards) of being a midlist novelist.  Interesting reading. Mary Doria Russell was dropped by Random House just prior to release of her new book Doc, a novel about the legendary John Henry Holliday. Doc has been on my "to read" list for nearly a year. Now, I think I'll move it to the top of my list.

It’s always been tough for first-time novelists to find a publisher. A dirty little industry secret is that it is much more difficult to get a second book published if the first one flops. Baseball gives you three strikes, after a loss you can run for political office again, a musician can usually get a second gig, but writers get one shot at fame and fortune.

Midlist is a tough place to be. It’s easy to slip into oblivion. Poor sales don’t seem to be the problem with Russell’s books. She seemed well ensconced, with good reviews and a dedicated following.

The traditional publishing industry is in the throes of a massive transformation, and Random House’s actions are indicative of this change. Many have said publishing is going the way of digital music, but I think it is going more in the direction of movies. The big Hollywood studios are in constant search of the next blockbuster, while on the side a thriving indie-film industry nurtures creativity and new talent. I suspect the big publishing houses are turning their backs on back-list and mid-list books. That’s okay. Indie-publishing will fill in the gaps.