Buddies in the Saddle reviews The Shopkeeper

Ron Scheer at Buddies in the Saddle has reviewed The Shopkeeper and published a companion  interview with me. 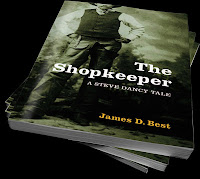 "This is an old-fashioned western in a way that goes back to the western’s roots. For the closest comparison, I’d offer Francis Lynde’s first novel, The Grafters, which was published in 1905. Both novels tell of a newcomer to the West who gets involved in a political intrigue, where influence is bought and sold, and greed rules the workings of government."