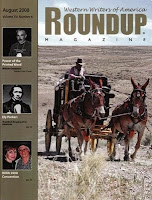 The Western Writers of America reviewed The Shopkeeper in the August issue of the organization's Roundup Magazine.

Steve Dancy is set on experiencing the West. At first glance, he is nothing more than a dilettante Easterner intent on writing a journal about his adventures on the frontier. He’s not running away from a hopeless life. To the contrary, he’s educated and seems to have enough money for his simple needs. Although anxious to avoid trouble, he can be pushed only so far, and when he chances upon some bad men doing unspeakable things to a woman, he feels he must take a hand. It isn’t long before he’s caught up in gunplay, which leads him into taking desperate measures, including buying a bank and a hotel, and influencing the upcoming gubernatorial elections. Dancy is a far different man than these Westerners think he is. Wealthy after selling off his Eastern businesses, maybe he should have told them what kind of goods he sold, because he’s sure not like any other shopkeepers they know.

This is a fast paced tale with an interesting hero. In structure, with short chapters, crisp dialogue, and lots of movement, it’s reminiscent of a thriller. Sadly, neither of the women in this story were enduring, the older too evil and crass to believe, and the younger far from worthy of the infatuation the hero apparently feels toward her. The motivation seems weak for all the mayhem that ensues. Still, you’ll certainly find enough twists and turns to provide an entertaining and exciting story.

I loved the review, but… "the older too evil and crass to believe?" This worries me because Mrs. Bolton was the only antagonist to survive in The Shopkeeper. Steve Dancy certainly finds her evil and crass ways unbelievable, but Mrs. Bolton has a villainous nature that might crush our gifted Mr. Dancy. I just hope that he wakes up and sees her for what she really is before the climax to Leadville.
at 12:50:00 PM