Zane Grey was an athlete, avid fisherman, and a lifelong philander. Grey was introverted and remained somewhat antisocial his entire life. Oh yeah, he was also a writer. In fact, he wrote his first story at age fifteen.

He attended the University of Pennsylvania on a baseball scholarship, and played minor league ball for several seasons. After graduating with a dentistry degree, he set up practice in New York City. About ten years later, he gave up dentistry to write full time.

His first published work was a magazine article about fishing, and he wrote extensively about fishing his entire life. At first, his novels were repeatedly rejected. He grew to love the West after several hunting trips to the north rim of the Grand Canyon, so he incorporated these experiences into his writing. Still his novels continued to be rejected. (His early works were not Westerns.)

In 1910, he wrote his first Western, The Heritage of the Desert which became a bestseller. Two years later, Riders of the Purple Sage became his best-selling book of all time. From that point forward, he was a celebrity writer and Grey’s Westerns were eagerly published.

Zane Grey authored over ninety books, counting the ones published posthumously from manuscripts or serialized magazine stories. He would cease writing for long periods, and then burst into writing frenzies where he would scribe over 3,000 words a day. He sold over 40 million books, most of them Western novels, but some were children’s stories or non-fiction books about hunting, fishing, and baseball. Over 100 films were based on his stories. After his death, he even made it to television with The Lone Ranger, Sgt. Preston of the Yukon—which were based on his characters—and Zane Grey Western Theater. His Westerns allowed him to explore the world extensively, maintain several homes, and write about fishing. In fact, his books made him a millionaire, which irked critics who had little respect for his writing skill. 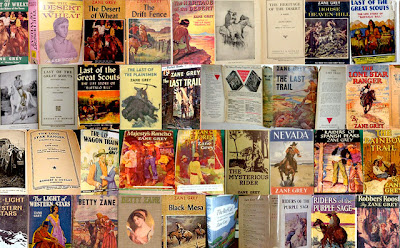 Zane Grey’s West Society claims that “In 57 novels, 10 books of Western nonfiction, and 130 movies, Grey, who died in 1939 at age 67, almost single-handedly created the "Myth of the West."